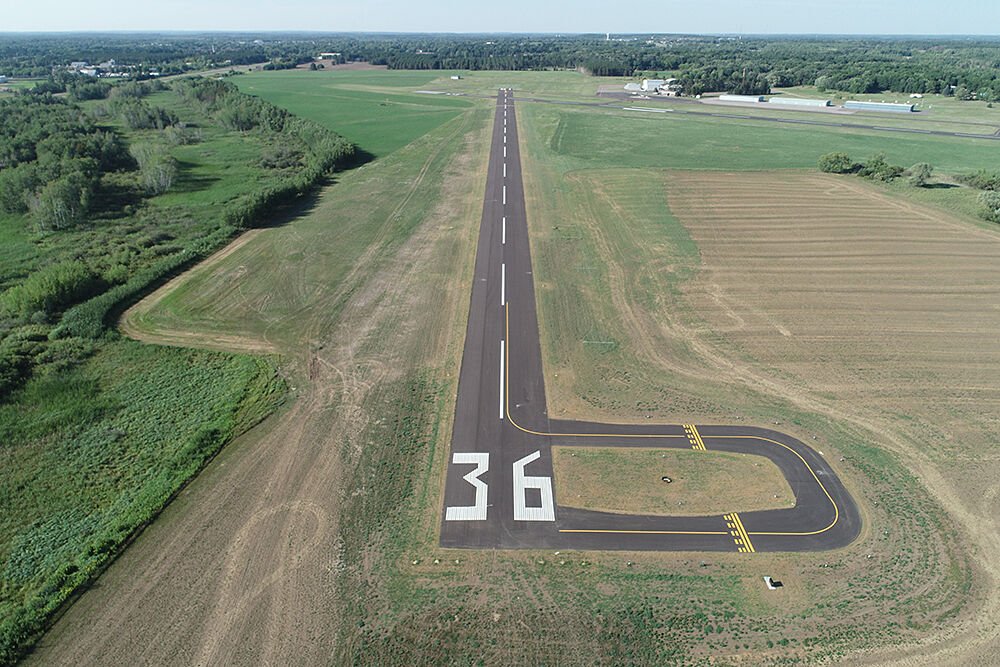 Everyone was flying high Monday, at the Little Falls/Morrison County Airport.

Several local aviators along with government officials from all levels were on hand to celebrate the grand opening of the crosswind runway at the airport. The day marked the culmination of a project that has been in the works since before many of those in attendance had anything to do with the airport.

“We’ve been working on this since the mid-70s, so it’s nice to finally see this come to fruition,” said Little Falls City Engineer Greg Kimman.

The project came to be thanks in large part to the city receiving more than $1.5 million from the U.S. Department of Transportation. The grant to construct the 2,855-foot crosswind runway was announced in July 2020, and KLJ Engineering began work shortly after.

U.S. Rep. Pete Stauber, 8th Minnesota District, was instrumental in securing the federal grant funding for the project. Stauber is a member of the Aviation Sub-Committee within the House Transportation and Infrastructure Committee.

He was on hand for Monday’s celebration. During a short speech prior to the ribbon-cutting, he said taking care of and investing in rural airports is a high priority for him.

“As we invest in them, Commissioner, it’s about the economy,” Stauber said. “When the airports are invested in, we have more people interested in coming and going. Every time there’s a landing, it’s money; whether it’s fuel, bringing supplies, or what have you. For us on the Aviation Sub-Committee, I fully recognize the importance of our rural airports and the economic benefit that they can bring.”

The project helped both of the runways at the airport come into compliance with Federal Aviation Administration (FAA) standards. Prior to the project, the main, east/west runway had a wind coverage of 92.05%. The FAA goal for pilots to be able to land in adverse weather conditions is 95%. The crosswind, north/south runway was not paved and, as a grass runway, it could not be used in the winter.

“A lot of it comes down to safety,” Kimman said. “Like I mentioned, depending on the wind patterns, it makes our airport much safer to land on in the adverse weather. So, if there are strong winds coming from one direction or the other, the pilots are definitely able to land.”

Airport Manager Tom Olson said the airport has about 20,000 operations — take-offs or landings — per year. He said prior to the crosswind runway being constructed, he often had to divert traffic to either St. Cloud or Brainerd because it was not safe to land in certain wind or weather conditions.

“If we have winds out of the east or west, a lot of aircraft can’t land here because it’s too dangerous,” Olson said. “Having a crosswind runway — a north/south runway — we get a lot more traffic, and basically anybody can land here.”

He said it has been a long journey to get the project completed.

Olson first got involved at the Little Falls/Morrison County Airport in 1998. At the time, there were already people working on adding a crosswind runway. They conducted environmental and archaeological studies — which are required by the FAA prior to any construction at an airport — and came up with five different alignments.

“The Army Corps of Engineers came and put a kibosh on all five of them,” Olson said.

The FAA eventually suggested tweaking the south end of the runway just a bit to avoid disturbing the lowlands on the south side of the property. They put that plan into motion and conducted more studies. Once everything was approved, they were able to apply for grant funding.

Stauber and Minnesota Rep. Ron Kresha, R-Little Falls, stepped up to help secure the money needed for the project.

“We were extremely excited,” Kimman said. “As you heard from some of the board members, they didn’t know if they were going to be able to see this in their lifetime, because we’ve been working on it for so long. Being able to get those funds awarded to the city was really something. They were definitely excited to see something on the ground.”

Olson said, back in 1998, the airport was used mainly for business travel. Though that still makes up for a lot of the traffic, he said general aviation has grown a lot in the last 20 years. He said there are about five flight instructors currently working out of the Little Falls/Morrison County Airport, with about 40 - 50 students each.

That has necessitated the airport to expand more than just the runway. Olson said in the last two years, three “huge” hangars were built, and there are two more set to go up next year for which he already has 100% assurance. That will use up the rest of the development area available for hangar space, meaning there will be more grant requests in the near future so the operation can continue to expand.

“It’s absolutely wonderful,” Olson said. “It’s getting quite a bit of use right now.”

Kimman said the runway officially opened to traffic earlier this fall. It has experienced quite a bit of use already, which he said is a plus for Little Falls and Morrison County as a whole.

He said there is a lot of aircraft housed in one of the many hangars that get used on a daily basis. Along with the flight schools, these are often used for business travel.

“Folks can fly in for businesses,” he said. “Whether it’s AirBorn, Wabash, those type of locations, they can bring customers in to be able to see their product, to be able to see the supplies that they have. It’s definitely a plus for them. It does help the commercial activity in Little Falls.”