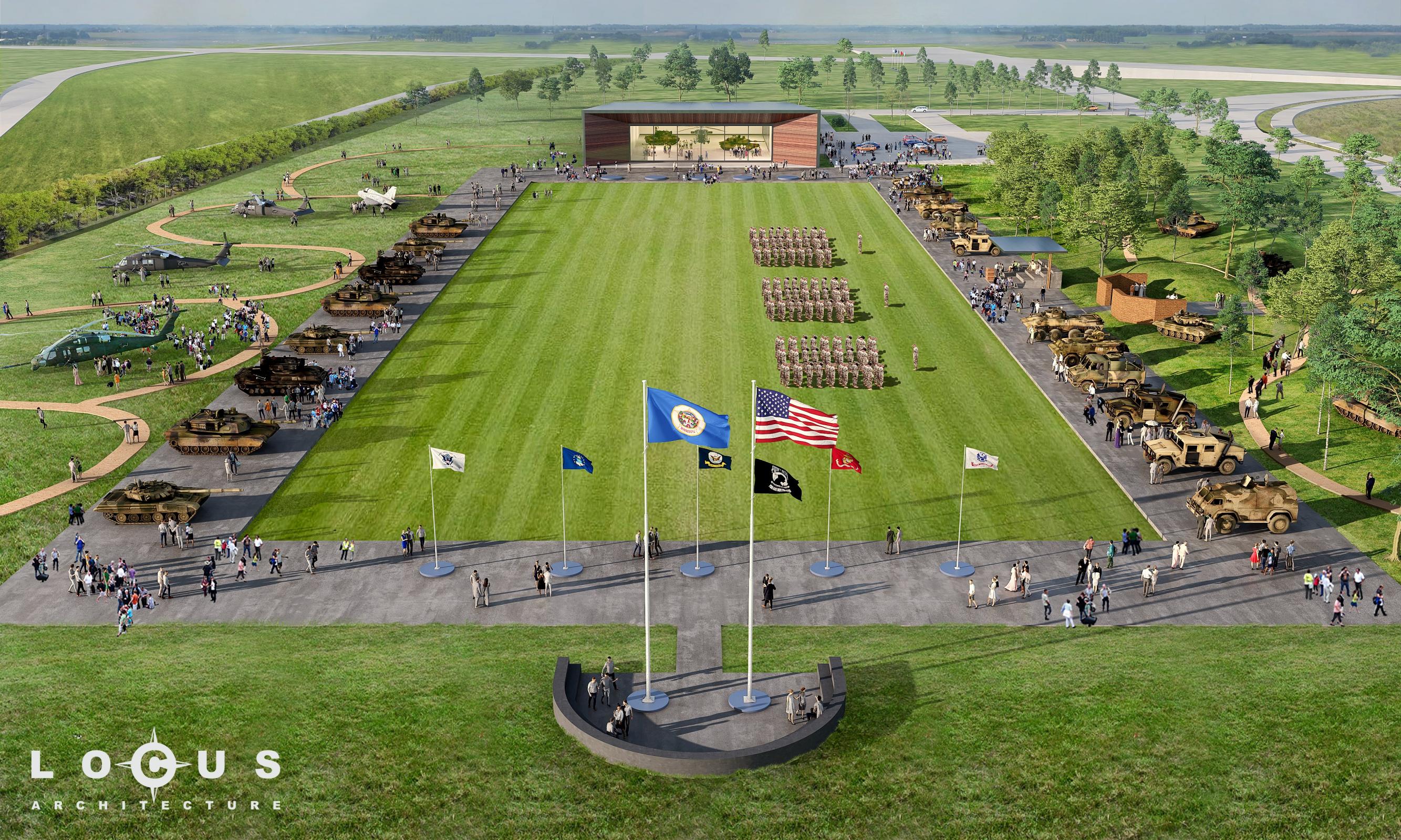 “This new museum will be a focal point for the Minnesotans who have served in all branches of the armed forces,” said Randal Dietrich, executive director of the Museum. “The bipartisan support in both the House and Senate was crafted with the leadership of local district Rep. Ron Kresha, House Veterans and Military Affairs Finance and Policy Division Committee Chair Rep. Rob Ecklund and committee member Rep. Bob Dettmer.”

The cost of construction, moving and outdoor elements totals $16 million. The KAHR Foundation has donated $3 million to get the ball rolling, and the museum seeks another $5 million for additional tools and technology to share veterans’ stories.

The architectural rendering shows the proposed parade grounds with mobile artifacts nearby, such as Humvees and tanks. The Minnesota Military Museum, in addition to exhibits, would offer space for reunions, meetings, and other functions.

• $1 million for construction of the Camp Ripley Veterans State Trail. This DNR trail honors vets. The plan calls for 32 miles of paved trail in the Little Falls area to connect other state trails, resulting in a 500-mile network.

Oct 30 2020
The Camp Ripley Veterans State Trail (CRVST) received some good news when we were informed that the $1 million bonding we requested was approved. The trail wasn’t at a standstill while we were waiting to see if it passed. The land was designated for the trail recently from Boise Cascade, Minnesot...Continue Reading

Oct 23 2020
The Minnesota Senate and House after two failed attempts to do so earlier this year, came together in a bipartisan effort to put forth a $1.87 billion bonding bill. It was signed by Gov. Tim Walz, Wednesday. The Senate vote was 64-3 and the House vote was 100-34. The bonding bill include...Continue Reading

Oct 12 2020
After more than five years of planning and finding ways to secure funding for the project, Tri-CAP broke ground for its new transit facility, at 13056 Haven Road in Little Falls, Sept. 30.     “It has been a work in progress for the last five years, so I am ver...Continue Reading